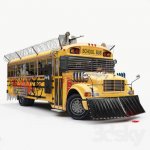 3dsky Pro – School Bus Apocalypse : To the contest ,Together with high technologies, human civilization developed at a faster rate. This process has become autonomous and virtually unmanageable. Artificial intelligence began to replace the mind. Thus, entertainment and pleasure replaced culture and morality. The world changed in one generation, but one thing remained the same – the division of society into castes, just as the countries were divided into colonies and metropolises. Such a world order was in every possible way concealed by forged concepts such as democracy, human rights, freedom of choice. In fact, tyranny and unpunished permissiveness prevailed. The best human qualities and virtues are gone and were ridiculed in every way as a remnant of the past. Passion and lust subdued the will and spirituality. But there were those who, by virtue of their social status, realized that civilization was on the verge of self-destruction and opposed the course of history. Lost people passed a point of no return – it was already a faceless crowd. “Living” called them servants of the ideocracy or simply – zombies. That same day of resistance came on September 1, 2027, when the first school bus, after a long period of downtime, set out on a journey to knowledge, through global degradation and ignorance. Before him, only two results – rebirth or death. Knowledge is power.